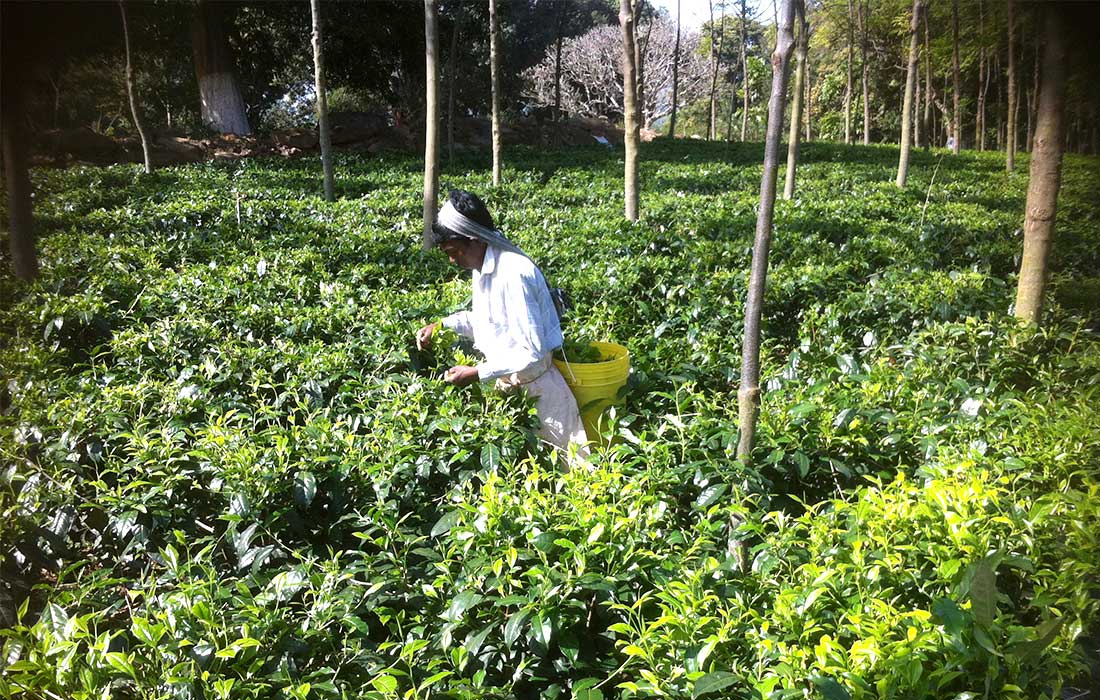 Tea Plantation in a Non-Conventional area in Sogra village of Dist. Jashpur (A tribal Dist.) in the state of Chhattisgarh by Pujyapaad Baba Gurupad Sambhav Ram ji for the inclusive and comprehensive growth, development and conservation of the region by providing employment to the inhabitants in their own home and discourage human migration due to lack of avenues of work resulting in the ever growing support for Naxalism. His Shri Sarweshwari samooh runs the ‘Avadhoot Bhagwan Ram Kushta Seva Ashram‘, an Ayurvedic hospital which has got a place in the Guinness Book of World Records & Limca Book of Records for curing maximum no of lepers and bring them back into the mainstream social setup.

The invigorating and rejuvenating aroma of tea is now around in the plateaus of central India, And it took the vision and dream of one man who could see the future of the region in harmony of what he was envisaging. Tea plantation in Sogra village of distt. Jashpur( A tribal Distt.) in  the state of Chhattisgarh, was a tool which Pujyapaad Baba Gurupad Sambhav Ram ji, the current fountainhead of Baba Bhagwan Ram Trust and Shri Sarveshvari Samooh, chose for the inclusive and comprehensive growth, development and conservation of the region. The ‘Avadhoot Bhagwan Ram Kushta Seva Ashram‘, an Ayurvedic hospital founded by Great Aughar saint Parampujya Aghoreshwar Bhagwan Ram Ji, which is being run by Shri Sarweshwari samooh having its head office at Padao ,Varanasi, has got a place in the Guinness Book of World Records and Limca Book of Records for curing maximum no of  lepers and bring them back into the mainstream social setup. As many as 2.47 lakh lepers had been treated during 1961-1990 in the kustha Sewa Ashram through ayurvedic and ‘fakiri’ system of medicine and about 98,000 lepers were registered between 1991 and 1999.

Rampant deforestation, depleting water levels, mining, human migration due to lack of avenues of work resulting in the ever growing support for Naxalism, and the overall environmental degradation of the region prompted Pujyapaad to take-up this “Research & Development Promotional Project in a Non-conventional Area” with this dream that if it becomes successful it can solve many burning problems of the area and this project will also improve the economic status of the inhabitants by providing employment in their own home. No doubt it will be a vardan for the locals. With this view on the experimental basis tea plantation was done in about an acre of land. The challenges were many and support & historical traces nil. Barren land, rocky terrain, nil to low ground water availability, improper gradients, untrained human resource and zero technical know-how were the major impediments.

But his vision and dream was much bigger and stronger. The vision helped him to understand that of the many requirements of tea plantation, the region did had some namely temperate and humid climate, day and night temperature ranges of around 42 to 17 degrees Celsius, annual rainfall of around 1500mm to 2000mm, porous and well-drained soil of pH ranging between of 4.5 to 5.5, and this being a new area of tea plantation the infestation rate of insects, pests and diseases was quite low.

All this took him forward to take on the challenges by primarily inviting Dr. I.D. Singh, an internationally renowned tea expert from Siliguri, West Bengal who helped him to sketch a road map of his dream. In about a year’s time, the challenges were rightfully addressed and the plants growth and quality astonished the experts and left the critics spellbound.

This achievement enthused Pujyapaad to extend the cultivation. First year around 6000 plants were cultivated. Observing good growth of the plants, the plantation was extended to another four acres and approx. 25000 plants were planted in the next year. Just in 14 to 16 months the growth of the plants were mark able and the experts were forced to say that the growth which has achieved here in this short span of time is normally achieved in three years in conventional area like Dwarf area. Trust is also planning of its expansion.  The state government too was inspired by this effort and started cultivation in around 12 acres.

To take it further, he took a step forward in setting up a guidance Centre and a mini tea processing plant. This would not leave the common people stranded in want but will also encourage them in the field of tea plantation.

Trust is also developing a Seed nursery Bari and a Mother clonal nursery. At present time the tea plants are being transported from far away. They have to travel a distance of more than 800 kms. With the development of seed and clone bari, the farmers not only can get the plants grown in their own climate, but also the cost of per plant will also be reduced. Keeping in view of this Trust has cultivated around 6000 plants for clonal purposes. Of the 6000 plants grown, the primary tea varieties currently cultivated are B157, RR70/144, P312, T78, CP1, TA17, TB25, TB26 and AV2, besides others.

But all the talk about this heroic effort of Pujyapaad will not bloom if the government, both at the Centre and in the state, does not come forward and take the lead in establishing it as a proper industry.